Addiction and alcoholism are non-discriminatory; they can affect anyone at any time in their lives. They do not distinguish between people of different age, race, ethnicity, religion, wealth, status, intelligence or gender. In modern day times, women are considered equal to men in more areas than ever before; they are able to join the armed forces, drive vehicles, vote, hold political positions and demand equal pay for equal work in many countries around the world. However, although addiction doesn’t discriminate, it appears that society does still attach a greater stigma of addiction to female addicts and alcoholics than men.

Double Standards in Addiction and Alcoholism

While addiction and alcoholism aren’t characteristics that are praised among either gender, women are often viewed more harshly than men for the same drug and alcohol use behaviors. It is evident that the stigma of addiction applies more strongly to women than men.

Women who break societal norms and defy gender roles — especially by doing something illegal — risk being labelled as bad or immoral. Those who are mothers may receive criticism for resorting to substance use and are viewed as failures or selfish, while fathers may be excused for having a few drinks after a hard day’s work.

Opioid addiction is one of the fastest growing and most pressing health crises happening in the world today and it does not discriminate based on gender either. While more men than women die of drug overdoses related to opioids, the rates of opioid drug overdose deaths among women are increasing on a massive scale. The CDC reports that more than 71,800 women in the United States died from prescription opioid overdoses from 1999 – 2010.

Data below is for both genders and shows that drug overdose deaths across the board are rising in the United states at an incredible rate – from 50,000 a year in January 2015 to well over 100,000 per year in 2022. (graph from CDC: https://www.cdc.gov/nchs/nvss/vsrr/drug-overdose-data.htm_) 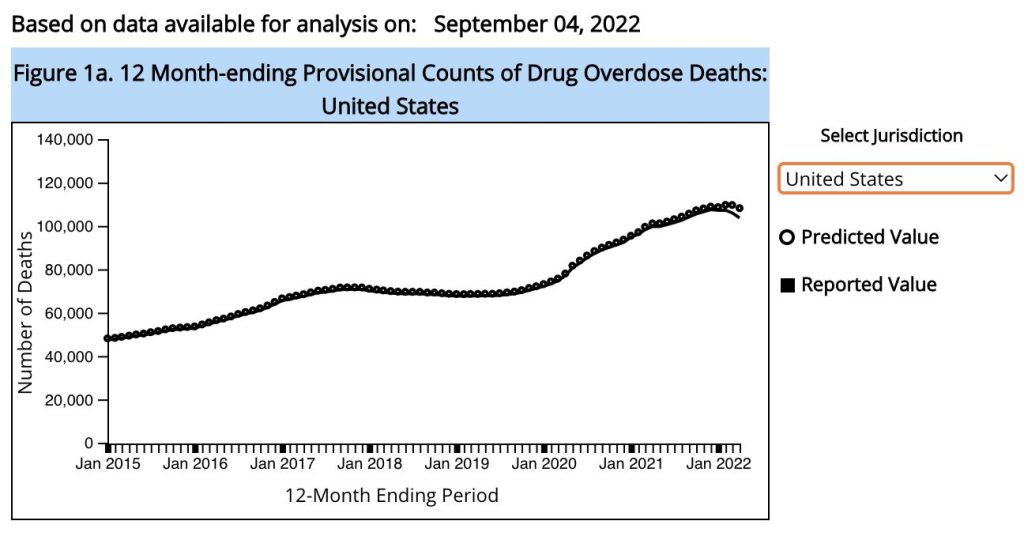 The Growing Impact on Families

Young and expectant mothers are one minority group who are increasingly starting to struggle with opioid addiction. This has resulted in a significant increase in babies being born with opioid withdrawal. Opioid addiction among women has also led to an increased strain on the foster care resources in the United States as more children are being removed from homes with opioid addicted mothers. This may be one reason for the greater stigma of addiction being attached to women than men.

Young, single mothers are often unable to afford the cost of treatment and do not have insurance which only serves to compound this growing problem.

Are Women More at Risk?

Not only are women more likely than men to experience chronic pain, which can facilitate a prescription for opioids, they also tend to use opioids differently than men. Women are more likely to take opioids for longer periods and at higher doses, which can cause dependence much more quickly. Women also have higher risk factors for addiction that include such things as depression and other psychological issues. Now that opioid prescriptions are being limited by various state and local programs, many women who have become addicted to prescription pain medications have turned to heroin as a more readily available substitute. They also often turn to or illegally manufactured pills such as Oxycontin and Fentanyl that can be bought on the streets.

The Stigma of Addiction and Barriers to Addiction Treatment

In the 1970s and 1980s, medical practitioners and researchers began to recognize that little was known about adequate treatment for women with substance use disorders. Prior to this, it was primarily men who sought treatment, whereas women would suffer in silence. Around this time, however, more women did begin attending the 12 step program Alcoholics Anonymous – but not without significant stigma of addiction being attached. There is a body of research that suggests that women are less likely to develop a substance use disorder compared to men. However, women often develop drug and alcohol addictions faster than men do, and they frequently face more barriers to treatment.

Men and women may use substances for similar reasons, such as to self-medicate or to cope with social pressures but, all too often, men and women have significantly different experiences in treatment for substance use. Some reasons why women may be more reluctant to seek addiction treatment include:

In addition to these barriers, women experience barriers to treatment that are related to the societal stigma of addiction. Where they seek treatment can be influenced by stigma as well as who they seek help from, whether it’s a health professional, self-help group or a religious source.

While there are no significant differences between the treatment process for men and women, women can benefit from gender-specific treatment because they feel more comfortable. This is especially pertinent if there is an underlying trauma which was caused by a male – rape, domestic violence, sexual or non-sexual abuse or divorce. There is a body of research which shows that women with substance use disorders may not even seek treatment if women-only treatment programs or private one-on-one (non-group settings) are not available. In these cases, gender specific treatment is essential, and that’s why The Lighthouse Bali aims to provide female clients with all female support staff and therapists in a private program.

As well as ensuring female clients feel safe and secure with female support workers and therapists, male clients are also supported by all male teams. It is important for all clients to feel safe and able to make connections during early recovery. A large part of this comes from feeling comfortable and understood by a team that you can associate with.

Our private programs are highly successful and our doctorate level clinical staff have extensive experience in the field of addiction. The duration of our Primary Inpatient Programs and Outpatient Care varies according to individual circumstances and can be tailored to include couples counselling / marriage guidance.

Both Primary Inpatient and Secondary Care treatment is based around monthly (28 day) increments. As a general guideline we recommend one to three months in our primary inpatient program, followed by one to two months secondary care in Bali, and up to six months of ongoing therapy (by Zoom or Skype from home). The longer an individual stays in rehab, the better the chances of staying clean and sober when returning home.

Contact Us Today
PrevPreviousEffects of Alcohol on the Female Body