What Is Morphine Addiction?

Morphine is an opiate drug prescribed by a physician to relieve severe pain. Morphine takes its name from Morpheus, the Greek god of dreams, due to its euphoric properties which are often described by users as a dreamlike state. The drug can be taken in the form of a tablet, syrup, injection or smoked.

Morphine has the potential to be highly addictive, as tolerance to it develops rapidly. In the United States, morphine is listed as a Schedule II drug that is used to treat moderate, severe, and chronic pain. It is also used for pain relief after major surgeries, treatment for cancer-related pain, and shortness of breath at the end of a patient’s life.

Morphine is also readily available on the streets as an illicit drug. Some of the common street or slang names for morphine include: M, Miss Emma, monkey, roxanol and white stuff. Morphine is a naturally occurring substance extracted from either the opium poppy plant or concentrated poppy straw. Its chemical makeup is similar to heroin, as they are both extracted from the same plant.

As a narcotic drug, morphine is often abused for its pleasurable effects. Those suffering from chronic pain also have the potential to misuse their medication, which increases their likelihood of developing a substance use disorder.

Immediate common effects of morphine use include:

Although morphine is a legal substance when prescribed, it is a heavily regulated one.

Those who abuse morphine in high doses put themselves at an extremely high risk of overdose. Signs of a morphine overdose include:

These symptoms are because morphine depresses the central nervous system. Overdosing on morphine can lead to unconsciousness, coma or slowed breathing to the point of death.

Recognizing the Signs of Morphine Abuse and Addiction

Addiction to morphine typically begins with a tolerance — needing larger doses of morphine to feel its effects. Once a tolerance develops, users will experience withdrawal symptoms when they don’t take enough morphine, making it hard to quit. In many cases, the psychological dependence on morphine develops soon after the physical one.

Someone addicted to morphine will compulsively look for and abuse it, ignoring the negative consequences. They will also usually make repeated unsuccessful attempts to stop using.

Prolonged morphine use can lead to many negative side effects, not least of which is addiction. Other damaging effects include damage to veins at injection sites and substance-induced mood disorders like depression.

Long-term side effects of morphine use include:

Once someone is addicted to morphine, they need the drug to feel “normal.” Morphine withdrawal symptoms start to take place as soon as 6-12 hours after the last dose. These symptoms will worsen until they peak between 36-72 hours (after the last dose). Morphine users build a tolerance fairly quickly, so withdrawal can set in even if someone hasn’t been using the drug for very long. Early onset withdrawal symptoms include watery eyes, yawning and sneezing.

Morphine detox is not just uncomfortable, it is also potentially dangerous, and even life threatening. Quitting morphine ‘cold turkey’ can increase inflammation and potentially cause damage to healthy brain cells. The Lighthouse Bali is one of the few rehabs in Bali able to offer a medically assisted detox. A medically assisted detox is the most comfortable and the safest way to stop using Morphine.

Post-acute withdrawal symptoms often continue to occur for six months or longer after ceasing Morphine use. Symptoms of PAWS include:

The Lighthouse Bali’s proven combination of an initial Primary Inpatient Program*1  followed by Outpatient Care and Ongoing Therapy has helped Morphine addicts from around the world get their lives back on track. Through individually tailored treatment, professional therapy, and compassionate support, you will be given the tools you need to ensure the best possible chances of a long term recovery.

If you are concerned about yourself or a loved one, we urge you to reach out and contact us in confidence. Our private programs are tailormade to suit individual needs and our doctorate level clinical staff have extensive experience in the field of addiction. If you are not currently in Bali but would like to begin a recovery program immediately, we also have online recovery options available which can be taken in this interim period before Bali reopens international borders.

To talk to one of our team members, contact us on WhatsApp or by Phone. Alternatively, send us an email and we will either answer your questions in writing or call you back, according to your preference – contact us –

*1 The duration of Primary Inpatient Programs and Outpatient Care varies according to individual circumstances. Both Inpatient and Outpatient treatment is based around monthly (28 day) increments. As a general guideline we recommend between one to three months Primary Inpatient Programs for Morphine users, followed by one to two months Outpatient Care in Bali, and up to six months of ongoing therapy (by Zoom or Skype from home). The longer you stay in rehab, the better your chances of staying clean when you return home. 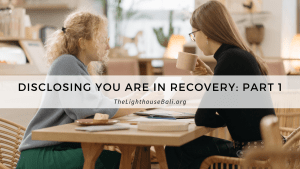 Disclosing You Are In Recovery: Part I

Being in recovery is something to be proud of, but also something we handle carefully with those around us. Learn more about disclosing you are in recovery here…