10 Ways to Strengthen Your Recovery During Lockdown

10 Ways to Strengthen Your Recovery During Lockdown

Lockdown, although challenging for many, is an ideal time to focus on yourself and really work on developing and strengthening your recovery. It’s easier said than done though, what can you do when so much seems off limits? Here are 10 ways you can make the most of this time and emerge from lockdown even more solid than ever in your sobriety….

If you’d like more information or advice regarding any aspect of recovery or addiction, or to find out more about our online counseling and online recovery programs, contact us through our online contact form or send us an email at: info@thelighthousebali.org 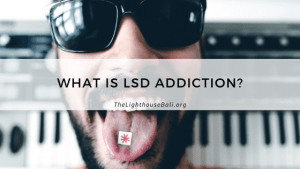 What Is LSD Addiction?

Lysergic acid diethylamide, commonly referred to as “LSD” or “acid,” is a psychedelic hallucinogen that produces changes in perception, sense of time and space and emotions. LSD is active at very small doses (around 20 micrograms). The drug is most commonly taken orally, in the form of tablets, droplets, or most commonly blotter paper that is absorbed on the tongue and swallowed.
Although LSD is considered to be a non-addictive drug, users often become addicted to the sights, sounds, and revelations they experience while under the influence, also called “tripping.” Users can develop both a tolerance and a psychological dependence to psychedelic drugs like LSD. There have been documented cases of prolonged, intense use causing negative side effects such as paranoia or psychosis. 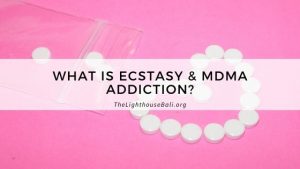 What Is Ecstasy & MDMA Addiction?

Ecstasy is the street name for a version of MDMA, chemically known as methylenedioxy-methamphetamine. It is an illegal, synthetic drug classified as a stimulant with potentially hallucinogenic properties. Molly is another name for MDMA. Both ecstasy and molly are made from MDMA, but ecstasy is used to describe a ‘designer’ version in pill or tablet form, while molly is the name used for the white powder or crystal-like substance.
Although molly is marketed as a pure form of MDMA, because it is a white powder there is no way to tell if it is actually pure or if it has been ‘cut’ (mixed with) other substances, which can commonly include: 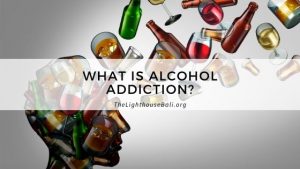 What Is Alcohol Addiction?

Alcohol is a legal, controlled substance that lowers anxiety and inhibitions. It also has a broad range of side effects, from loss of coordination to slurred speech. Not everyone who drinks is an alcoholic, but anyone whose life is negatively affected by alcohol on a consistent basis is considered to have an alcohol use disorder. Alcohol is commonly consumed as a drink in various forms, including beer, wine and hard liquor.